Letter to the Philippians: Chapters 3 & 4 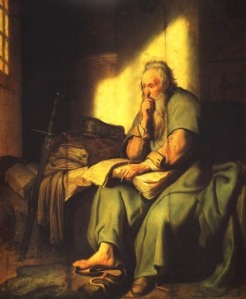 Paul takes a turn in this chapter and has a somewhat angry voice, calling false teachers dogs and evil-workers.  These teachers were Jewish, and Paul felt they were undoing his work.  We may love dogs, but the connotation was a bad one in Paul’s day.  Nothing could be lower.  And it was by this name that many Jews called Gentiles.  So Paul is throwing this right back at them.  They would be the last to call themselves evil-workers; they kept all the laws well.  But Paul defines righteousness as casting oneself freely upon the grace of God  (Barclay, The Daily Study Bible Series, p. 54).  How do you identify with this?  Have you ever declared yourself right, and then eaten those words?  What is it to cast yourself freely before God?

Paul’s meeting the risen Christ had a profound impact on him (Who wouldn’t have been!).  He counts everything as rubbish before that.  Have you had profound God moments?  Did they change the course of your life?  Would you count what happened before as garbage?

Reflect on where you are in your spiritual journey, whether you are at the beginning of the race or have reached personal maturity.  James Fowler PhD came up with 6 Stages of Faith.  These are not necessarily linear but one can hop from one to another throughout their life:

Paul stresses Christian fellowship (koinonia) in this letter, not only what he feels for the Philippians but what he hopes they feel for each other.  He uses the prefix “syn-“, which means “together with” when attached to a verb.  For example, 4:3 could be translated, “I urge you, my co-companion, to co-assist these women, for they have co-struggled with me in the gospel, together with Clement and the rest of my co-workers.”  So the emphasis is that we are all in this together, (Powell, Introducing the New Testament, p. 354).  Doesn’t that give us hope?  Doesn’t it make the hard times easier?  It makes the journey a gentler one.

Paul makes us want for better.  He lives in gratitude, which seem to make all the difference.  Despite hardship, there can be a peace because of striving for all that is good and right.  How can we apply this to our life now?

What is it all About?

19th Sunday in Ordinary Time B

This is one of my favorite jokes from the 1980s from the deadpan comedian Steven Wright.  It is a little subtle so wait for it.  “What… if… it… were…. really… all… about… the… Hokey… Pokey?”  I have been thinking about this lately because we seem to have some confusion about which ideas are big enough to let it be what it is all about.  I saw a car commercial bragging about technology, and the potential buyer said, “Wi-fi in the car.  That’s the dream.”  Really, that’s the dream.  Then there was a radio commercial which asked what brings people together than anything else.  I was intrigued.  After all, bringing people together seems part of my job description.  Then a chorus yelled, “T-SHIRTS!” and my heart fell.

Letter to the Philippians: Chapter 2

Paul continues to preach unity among the Philippians.  There must have been something troubling this community for him to worry.  Raymond Brown (Introduction to the New Testament, p. 487-488) points to 3 different troubles:

In 2:6-11, we see one of the earliest indications of an understanding of the Incarnation of Christ.  Jesus is in the “form of God”, “in human likeness” and “God greatly exalted him”.  Theologians debate whether Paul was truly speaking of preexistence, that Christ existed (in the form of God) before he became the man of Jesus on earth.  This would not be resolved until the councils of Nicea (325AD) and Chalcedon (451AD).  This passage is often called the “Christ Hymn” because of how poetic it is.  It was probably used as a creed or response in early worship, or maybe it was sung.  Maybe Paul wrote this piece himself or maybe he was quoting something the Philippians would have been familiar with  (Powell, Introducing the New Testament, p. 349-351.

Reflect on some of the other phrases in the hymn…did not regard equality with God something to be grasped.  For the words to be closer to the original Greek, it would be translated as, “Jesus did not think it robbery to be equal with God, something to be snatched at.”  Jesus didn’t have to snatch his equality with God because it was his right, his being.  He didn’t hold it tightly either, keeping it for himself.  He offered it freely to ALL(Barclay, Daily Study Bible Series, p. 36).  This gift of beautiful life is a constant letting go.  We can’t hold on too tightly.  We are meant to give ourselves away, like Jesus did.  Not to be doormats, or be used by others…it is conscious choice.  We find the gift of who we are within ourselves and be that fully, opening ourselves with that intentionality.  We find that the gift comes back to us in abundance!  We “pour out as a libation”, but it only makes more room for God to fill us.

Why must we work out our salvation with “fear and trembling”?  Barclay describes these words as coming from a sense of our own creatureliness and powerlessness to deal with life triumphantly.  It is meant to drive us to SEEK God, not hide from God.  The underlying feeling is a knowing that God is there to help us, that we want to please God.  Salvation is a free gift from God, but we must have eyes to see it and hands to work toward it.  It is God that works in us the desire to be saved.  Any gift has to be received (p. 41-42).

Letter to the Philippians: Overview & Chapter 1

Glorious Saint Paul, most zealous apostle,
Martyr for the love of Christ,
Give us a deep faith, a steadfast hope,
A burning love for our Lord,
So that we can proclaim with you,
“It is no longer I who live,
But Christ who lives in me.”

Help us to become apostles,
Serving the Church with a pure heart,
Witnesses to her truth and beauty
Amidst the darkness of our days.
With you we praise God our Father:
“To him be the glory, in the Church
And in Christ, now and forever.”  Amen

Philippians is undoubtedly a letter that Paul actually wrote.  It was on his second missionary journey, about the year 52AD.  He had been urged by the vision of a man in Macedonia to come and help, so he sailed from Alexandrian Troas in Asia Minor.

The story of Paul’s stay in Philippi is told in Acts 16.  Paul is illegally imprisoned because of an encounter with a slave girl with an oracular spirit.  He has to leave the city, but a bond of friendship develops between him and the Philippian community unlike any other (Barclay, The Daily Study Bible Series, p. 4-6).

In other Pauline letters, Paul has to explain why he is writing or the right he has in writing to them.  Not so with the Philippians because of how well they know each other.  How wonderful to have close spiritual friends!  Do you have any, and what joy do they bring to you?

What of the term slave?  Paul (and Timothy) are bound to Christ Jesus.

Note that Paul calls all of them saints, or holy ones WITH the overseers and ministers.  The Greek for overseer is episkopos, which later came to be a bishop.  The Greek word for minister is diakonoi, which later would be a deacon.  But ALL are holy and called to serve the Lord.

Paul speaks of joy.  The whole point of the letter is I rejoice…do you?  Ask yourself what brings you joy in your faith.  Prayer?  Mass?  Being with others in belief?  Working towards a mission?  Doing what is right?  The person of Jesus?  The free gift of it?  All of this is described in this letter  (Barclay, p. 13-15).

Progress of the Gospel

In Paul’s eyes, all publicity is good publicity!  Whether Christ is preached with bad motives or not, Christ is proclaimed and that is the mission.  The only mission for Paul.  He willingly devotes his life to this man he has never met, except in the risen encounter.  It is the singularity of Paul’s purpose in life that gives him so much passion, hope, courage and strength.  We can learn so much from Paul’s example!

He completely believes and spreads the news of the resurrection.  You can hear his inner conflict that he is at peace with dying because he wants to be in the fullness of God; but, he is happy to stay and help his friends in faith too.  He knows he will help them on the other side of life too.  His conviction is so strong considering how soon this is after Jesus’ death.

Instructions for the Community

In Paul’s mind, oneness in spirit is what holds us strong in our faith.  Paul knows that there will be struggle, but there is also hope in the Lord!  What does this oneness mean?  Richard Rohr uses the term “Oneing,” which he got from Julian of Norwich.  She used this term to describe what was happening between her soul and God, “By myself I am nothing at all, but in general, I AM in the oneing of love.  For it is in this oneing that the life of all people exists,” (Oneing Vol I No I, p. 12).  This oneing can overcome all divisions, dichotomies and dualisms in the world at every level:  personal, relational, social, political, cultural, in inter-religious dialogue and spirituality.  Richard Rohr says it is the unique and central job of healthy religion (re-ligio = to re-ligament!).  What would this oneness look like in your life?  How might it help in your struggles?