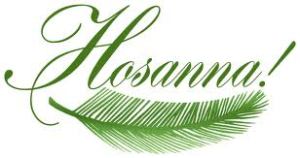 Thoughts on the Gospel at the Procession:

In Jesus’ day the Jewish people had hoped that the Messiah would come with military power and might – and that with that power he would free them. But Jesus came and opened a new way. Just as he rode to Jerusalem on a donkey, an ass, a pack animal, rather than arriving with armies and angels, so he opened a new path for the reign of God, the Kingdom of God. He preached about God who cared for the least, who sought the lost and the poor and counted the hairs of one’s head. This God reached out to the Gentiles, the enemies of the Jews and spoke of loving one’s enemies as if it were possible. His idea of the reign of God and how a Messiah might act was incomprehensible to many of the people. This was not the way a messiah ought to act. This could not be God or God’s servant.  (Celebration, April 13, 2002)

What does the word Passion mean for you?

A dictionary says that it means strong emotion and agitation, such as ardent love, eager desire, even rage. It also means intense suffering.  Jesus is the face of God:  “He is the image of the invisible God.” (Colossians 1:15)  What do we learn of God in his passion?

In many devotional books we encounter the idea that Christian faith in the cross is belief in a God whose unforgiving justice demands a human sacrifice – the sacrifice of his own son. This somber and angry God contradicts the Good News of God’s love and makes it unbelievable. Many people picture things this way, but it is false. In the Bible, the cross is not part of a picture of violated rights; the cross is far more the expression of a life which is a ‘being for others.’

This is an appalling picture of God, as one who demanded the slaughter of his own son in order to assuage his anger. Such a concept of God has nothing to do with the New Testament. The New Testament does not say that human beings reconcile God; it says that God reconciles us.

The fact that we are saved ‘through his blood’ (Hebrew 9:12) does not mean that his death is an objective sacrifice . . . In world religions, the notion which dominates is that of the human being making restitution to God in order to win God‘s favor. But in the New Testament the picture is the exact opposite. It is not the human being who goes to God, to bring him a compensatory gift or sacrifice; rather, it is God who comes to human beings with a gift to give us. The cross is not the act of offering satisfaction to an angry God. Rather, it is the expression of the boundless love of God, who undergoes humiliation in order to save us.

Christian worship is not the act of giving something to God; rather, it is the act of allowing ourselves to receive God’s gift, and to let God do this for us.

Dietrich Bonhoeffer was a Lutheran theologian who died at the hands of the Nazis on April 8, 1945.   In his book The Cost of Discipleship, he talks about cheap grace and costly grace:

Cheap grace is when we look to ourselves for what we have in life.  The blessings we have are taken for granted.  We can do what we want without retribution.  Cheap grace places ourselves in the center.  It is easy.  There is no personal responsibility, unless it is to take credit for the good.  But it is empty.  No, grace was bought at a price in Christ Jesus (I Corinthians 6:19-20).  There is more to life than living in cheap grace.

Jesus died on the cross to save us.  He was without sin, yet he died for all of our sins so that we would know eternal life.  That is costly grace.  Living in that grace understands that.  It is looking to God for what we have in life, knowing it is all from God.  God is the center.  It is being a disciple, wanting to do what is right because that is what Jesus did.  It is wanting to please God, knowing God’s grace is a free gift but having the desire anyway.  It is a fulfilled life.  It is, “…water on parched ground, comfort in tribulation, freedom from the bondage of a self-chosen way, and forgiveness of all sins,” (Bonhoeffer, p. 52).  Costly grace is living with the knowledge of what Jesus had to do to allow us the freedom of eternal life, and being grateful for it.

“Happy are they who, knowing that grace, can live in the world without being of it, who, by following Jesus Christ, as so assured of their heavenly citizenship that they are truly free to live their lives in this world, “(Bonhoeffer, p. 60).  There is a freedom in knowing you are living the way you were meant to live.  That you are answering a call, or at least attempting to do so.

Jürgen Moltmann, another Geman theologian, witnessed the Allied fire-bombing of Hamburg and was held as a prisoner of war by the British.  It was there that he developed his theology of the cross.  From Elizabeth Johnson’s Quest for the Living God  (p. 61):

While his Son is dying on the cross, God the Father suffers too, but not in the same way.  The Father suffers the loss of his Son, experiencing infinite grief.  There is total separation between them; they are lost to each other.  At the same time, however, they have never been so close.  They are united in a deep community of will, each willing to do this for love of the world.  As a result, the Hoy Spirit who is love, the Sprit of their mutual love, flows out into the broken, sinful world.  Their Spirit justifies the godless, rescues the abandoned, befriends the lonely, fills the forsaken with love, brings the dead alive, and guarantees that no one will ever again die godforsaken because Christ is already there in the depths of abandonment.

Here are at least two other lessons we can learn from the cross:

It is always important to understand that by the end of the 1st century  Christians were struggling to define themselves apart from their Jewish roots and to try to find their place in the larger Gentile world. In the process they began to realize they were not merely another Jewish sect. Antagonism grew on both sides.  In Matthew’s passion story we see an effort to blame ‘the Jews’ – really meaning the authorities for the most part – and to exonerate the Gentiles.  Be careful not to read into these statements more than what is there.  Anti-Semitism is never right, nor is it what the inspired Word of God is trying to teach us. Power-hungry men, some Jewish and some Gentile, who wanted to play ‘god’ were responsible for Jesus’ suffering and death.  In a true sense, responsibility lies where it belongs, with evil and sin.   (Living Liturgy, Year A, 89 & Monika Hellwig, Jesus: The Compassion of God)